At the RISC-V Summit 2022 in San Jose, Picocom’s Chief Architect Gajinder Panesar (pictured 3rd from left in the awardees group photograph) was presented with the RISC-V Ratification Award for ratifying Efficient Trace (E-Trace) for RISC-V this year.

At Embedded World in June 2022, RISC-V International announced a new batch of specifications detailing extensions and standards, which can be added to the RISC-V instruction set architecture — the first to be ratified so far this year.

Gajinder Panesar of Picocom and Chair of the RISC-V’s E-Trace Task Group, which led the development and ratification of this specification. The E-Trace specification was the first of the four specifications RISC-V International has formally ratified — adding to the 16, representing over 40 individual extensions, ratified in 2021.

For more information on the RISC-V International, click here. 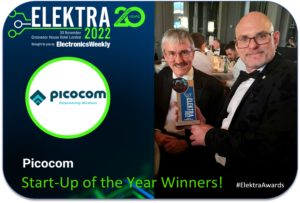